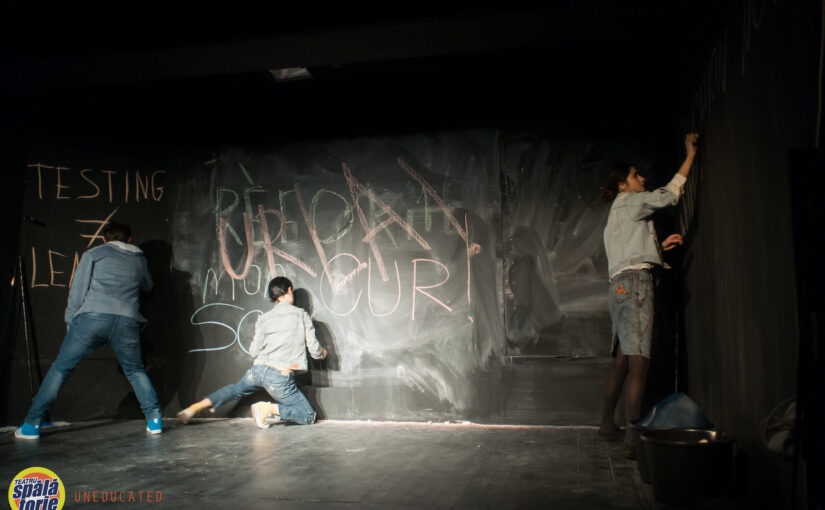 We want to continue working here – an interview with Nora Dorogan and Artiom Zavadovschi, members of the spalatorie theatre collective from Chisinau.

spalatorie theatre was initiated in 2010, in Chisinau (Moldova), by Nicoleta Esinencu, Doriana Talmazan, Irina Vacarciuc, Viorel Pahomi and Nora Dorogan, graduates of the faculties of acting and cultural management. They appeared in a time when the independent cultural initiatives were facing a total disinterest on behalf of the state towards their work, and as a response to the inability of the public culture institutions to develop a political discourse in the performing arts field.

Between 2010 and 2017 the spalatorie theatre used to run their own venue, which other initiatives could also use, that hosted various events, including performances and politically charged parties. Being guided by the principle of giving a voice to the voiceless and underrepresented, the collective decided to provide a common space for different ethnic communities in order to combat xenophobia and racism present in Moldovan society.

What Moldovan society has hidden very well, ignoring and trying to marginalise, the theatre collective was bringing out – hence the metaphor associated with the name of the collective (spălătorie meaning laundry). As a political theatre, the initiative aimed to speak about histories marginalised in the public sphere, communities disregarded and ignored, promoting a critical attitude towards everything that happens in everyday life, contributing to the development of a feminist and anti-capitalist discourse as a counter-discourse to the neoliberal one.

One of the subjects they set out to thoroughly research and tackle among the first, is that of the Holocaust of the Second World War. Other equally important topics and themes followed, such as the problem of exploitation of workers, increasing social inequality due to political decisions tailored to make the education system more efficient, which led to the closure of schools, and others. Research (working in the libraries and archives) is the first step in the process of choosing a topic for a future performance, while the personal interviews collected during the research are one of the most important sources of information, providing a “human” understanding of historical events.

spalatorie theatre has also engaged in other struggles, by expressing solidarity with members of the LGBTQIA+ community, inviting them to use the theatre as a platform from the very beginning. The collective has developed a feminist, anti-homophobic and anti-racist discourse, while creating an opening for collaboration and joint action with the feminist action group, supporting among other things the development of the independent cultural scene and initiatives fighting for an accessible and democratic public space.

“In absence of political education people do not even realise that all public discourse has political implications, nor do they want to take the responsibility for it on themselves.” (Nora Dorogan)

As an educational initiative, spalatorie theatre proposes information, stories and context for the general public, approaching different themes and topics from a critical point of view and contributing through their projects to the political education of citizens. In order to achieve it they were regularly inviting people to tell their personal stories, bringing out the oppressive moments best.

“Beyond its physical space, theatre is like a mirror of society that offers a clear and assumed attitude to the reality around us.” (Artiom Zavadovschi)

During the first 7 years of activity, while the physical space existed, the theatre collective managed to create a loyal audience, mainly composed of young people and employees from Chisinau, interested in participating in the discussions, and who came throughout the season. At present, spalatorie theatre lacks a space, which hardens its work, and it has had to respond to collaboration and co-production opportunities offered by partners abroad, in order to continue making theatre and in the hope of returning to meet the audience in the Republic of Moldova.