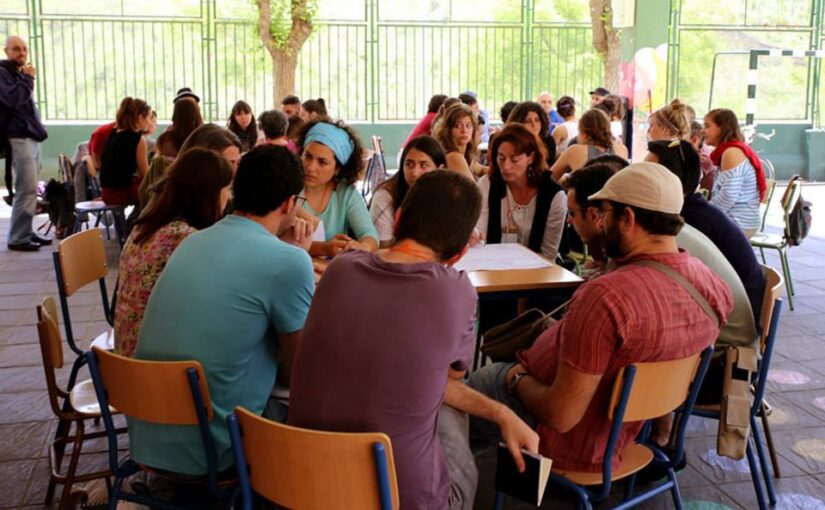 Granada in Transition project was born in Granada in 2012 due to the need to embark on a path of transition towards a more sustainable, equitable and humane physical and social environment.

In Granada in Transition they work to promote the development of initiatives that address current challenges such as climate change, the economic and social crisis; the relations of production and reproduction of our society with its consequent inequalities; and our dependence on fossil fuels and their derivatives.

In our society, almost everything is linked to the capitalist system. The city of Granada is no exception.

If your toaster breaks, you have to buy a new one. Maybe you bought it last year, but due to, on numerous occasions, programmed obsolescence, you will go and buy (consume) a new one. In Granada in Transition they have created a project called ”La ReciCreativa” to be able to fix all those objects that with small repairs, can continue to work, thus reducing unnecessary consumption.

When we talk about consumption, we also talk about services. In the capitalist system, if you want to enjoy a service, you have to pay for it. Granada in Transition breaks this well-known rule to focus on people’s experiences. They propose a non-consumerist leisure. If you want to dance, you don’t need to pay for it.

This project ”Dancing for dancing”, was my first contact with Granada in Transition. We all wore headphones, and with the same playlist, we were dancing in the streets of the Albayzín neighbourhood. Albayzín is a beautiful historic quarter, with narrow streets, white houses and many (too many) tourists. I grew up in this neighbourhood, but this was definitely a unique experience. We tend to use the streets to get from one place to another, the faster the better. Time is money. If we are lucky, we even look at the houses, the ground or smell the flowers. But we never dance in the street. When you dance in the street, without a doubt, you relate differently to public space. You feel the architecture and urbanism in a different way. I recommend it.

Let’s continue to get to know the city of Granada. The Vega of Granada is a unique area for many reasons: the topography is flat, the soils are deep, there is abundant organic matter, there is easy access to water and it is accessible to the public. There are areas of La Vega that can be reached on foot in 15 minutes from the city centre.

However, for many years it has been neglected and degraded. The ring road has contributed to create a great physical and psychological barrier between the city and La Vega.

Nowadays there are initiatives such as La Bolina, Hortigas or Granada en Transición to enhance and take advantage of the great opportunity that nature provides.

Ecological and sustainable gardens are helping to strengthen the soil, reducing flooding (porous soils). By increasing urban green mass, they also contribute to balancing temperature, increasing oxygen and mitigating environmental pollution. The consumption of local vegetables and fruit (from the city itself) helps to reduce air pollution by considerably reducing the transport of air pollution (carbon footprint). Granada in Transition organises nature walks to learn about and value nature, helping to transmit “traditional knowledge”.

Granada in Transition is an example that there are other ways to participate in society, far from individualism.

To have access to education is also to have the necessary tools to facilitate re-appropriation of our actions, avoiding unnecessary consumption patterns.

Education also means knowing and valuing our immediate environment, the city and the countryside.