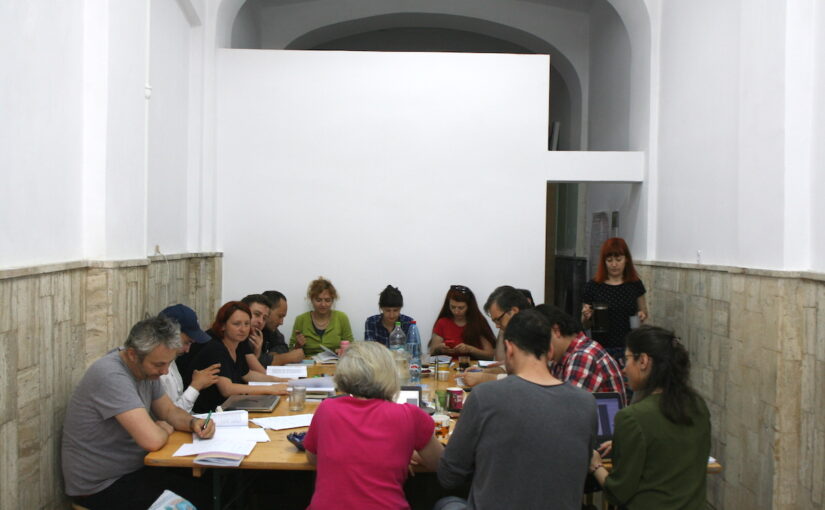 The video-interview presents different perspectives of the protagonists on the activity of a reading group, as a way to exchange thinking, especially political thinking, with other people, having a text as a base for a constructive discussion.

Starting with 2011 a group of people in Belgrade began organizing reading groups as they were quite alone in their thinking and they felt there was little communication and basically no framework in which they could share their knowledge or share their thinking. Those reading groups served as a frame for rethinking of the breakdown of Yugoslavia and of the new classes that appeared in the new constituted states after Yugoslavia and of the class division in general, how did it play out, in the breakdown of Yugoslavia, and then in the wars and after the wars, raising the question: “Was the anti-war movement a class movement?”. A couple years later, in Iași a group of artists, theoreticians and historians were looking at artworks and were analyzing together contemporary art projects that had different actions in the public sphere. The two groups came together for the first time in 2017, in the frame of the project Glittery and the Misery of the European Middle Classes, realized with Nebojsa Milikic in the context of Iasi, where the strong right wing movement appeared in the beginning of the 20th century, followed by Iasi pogrom during The Second World War in 1941. The project was making visible the relation between the ideology of the European middle classes and its historical connections to fascism.

The reading groups can be empowering tools, with their own methodology, building confidence in people who initially believe that philosophical texts are not for them, since they were not trained for that. The reading group can also create space and serve as a discoursive extension inside the project, by forming our consciousness that needs this kind of back and forth between theory and practice, especially for people who are not in an academic framework. They also keep us out of our comfort zone, especially when varied people, with a lot of different ways of thinking and backgrounds, and from different locations take part in those meetings. Unlike in the contemporary art world, by looking together with other people on texts forces you to order your thinking in order to really understand the other and make yourself understood or build up some understanding that is truly shared with the rest of participants.

Unfortunately, the impact of one discussion or even a reading group is rather limited, since the pressure of going back to the mainstream thinking is much more intense. The limits these reading groups have are also related to classes, since they do not manage to penetrate the working class, mainly due to historical circumstances which excluded the workers from this activity, it being assigned to the intellectuals (intellectual work that had to be done by intellectuals) and due to the fact that it can take a lot of time and sometimes even years. Big organizations like trade unions don’t really open up to conceptual, or historical, or sociological activities. Even if they have educational activities, they are focused mainly on workers rights.

Due to the fact that reading groups don’t end up with a concrete product makes them a true place of education, of learning and of creativity. In the end of the day it is not that much important what, but how we read, and how the chosen texts help us understand some concepts related to society and to us as community. Besides the gathered knowledge from the text, the social relations that are created in the group are equally important. In respect to this, the more we affirm workers’ participation, the more they will find time to do this participation and contribute to the body of the society, including to the reading groups.